Last month, Sam Randazzo, Chair of the Public Utility Commission of Ohio, abruptly resigned after the FBI raided his home. It was reported that Randazzo had taken $4 million in secret payments from FirstEnergy, the corrupt energy company at the center of the largest bribery scandal in Ohio history. …

Will DeWine and other Republicans ditch their dirty cash?

Last night, news broke that FirstEnergy had fired its CEO and other top executives involved in the HB 6 scandal. They cited violations of their code of conduct related to the federal investigation as the reason for their departure.…

Even in districts they gerrymandered, GOP can’t outrun stink of corruption

In response to today’s hearing on bills dealing with HB6, in which Republicans blocked a bill to repeal the corrupt legislation, ProgressOhio Managing Director Michael McGovern issued the following statement:

In a shocking story by the Ohio Capital Journal, Senate President Larry Obhof finally admitted to having no interest in dealing with the COVID-19 pandemic:

“What magic law do you want me to want me to pass that will increase the number of tests?…

RE: Ohio GOP’s Corruption – 20 Years of The Same Story

Over the last year, anti-union attacks in Ohio have escalated significantly. ProgressOhio seeks a Campaign Manager to monitor the activities of anti-union groups and directly push back on their efforts in real-time.

This new role will entail coordinating rapid response tactics as well as efforts to detect and counter anti-union groups as they attempt to spread false information to working people, especially in public-sector unions.…

Repeating their failure with the Ohio Transportation Budget, Ohio Republicans once again blew past deadlines to fund the State government.… 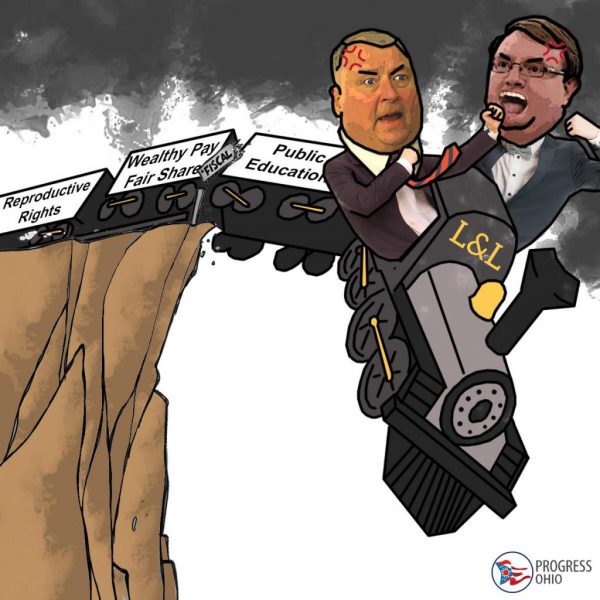 Repeating their failure with the Ohio Transportation Budget, Ohio Republicans once again blew past deadlines to fund the State government. Due to politics, egos, and petty bickering, Republicans Governor Mike DeWine, Senate President Larry Obhof, and House Speaker Larry Householder failed to pass a 2-year budget by the constitutional deadline of July 1.

Instead, Republicans passed temporary budgets that give zero reassurance to schools, government agencies, and nonprofits relying on State funding that funding will be there long term. While Republicans may tout that their two-week interim budget continues current spending levels, the fact remains that the uncertainty leaves schools and government agencies unable to adequately plan.

While it is unknown how the uncertainty will harm Ohioans, the last time Republicans held the budget hostage the Cleveland Plain Dealer reported “Adoptions across Cuyahoga County are frozen, child-care providers are in danger of closing and school districts are having problems drawing up budgets with the next school year creeping closer each day.” (Cleveland Plain Dealer; July 9, 2009; p.A1)

“Instead of overcoming petty politics and ensuring our state can provide services to Ohioans, Republicans are going on vacation,” said ProgressOhio Managing Director Tyler Dillon. “In less than six months, Republicans have failed three times to pass a budget on time because to them, political squabbles take precedence over their own constituents. No other unified state legislature has been this incompetent so fast.”

Petty egos have driven these delays, as evidenced by:

Attorney General Mike DeWine might have spent almost $7 million beating back Lieutenant Governor Mary Taylor in the GOP gubernatorial primary, but that number doesn’t even include the millions of taxpayer dollars DeWine has spent to support his political ambitions.…

Parma – Local advocates and constituents held a press conference on April 17 to educate the public about how the new tax law will impact Ohio families and services they depend on.…