This is the first part of a weekly series from ProgressOhio, highlighting the corruption Ohio Republicans have actively participated in, encouraged and allowed to fester 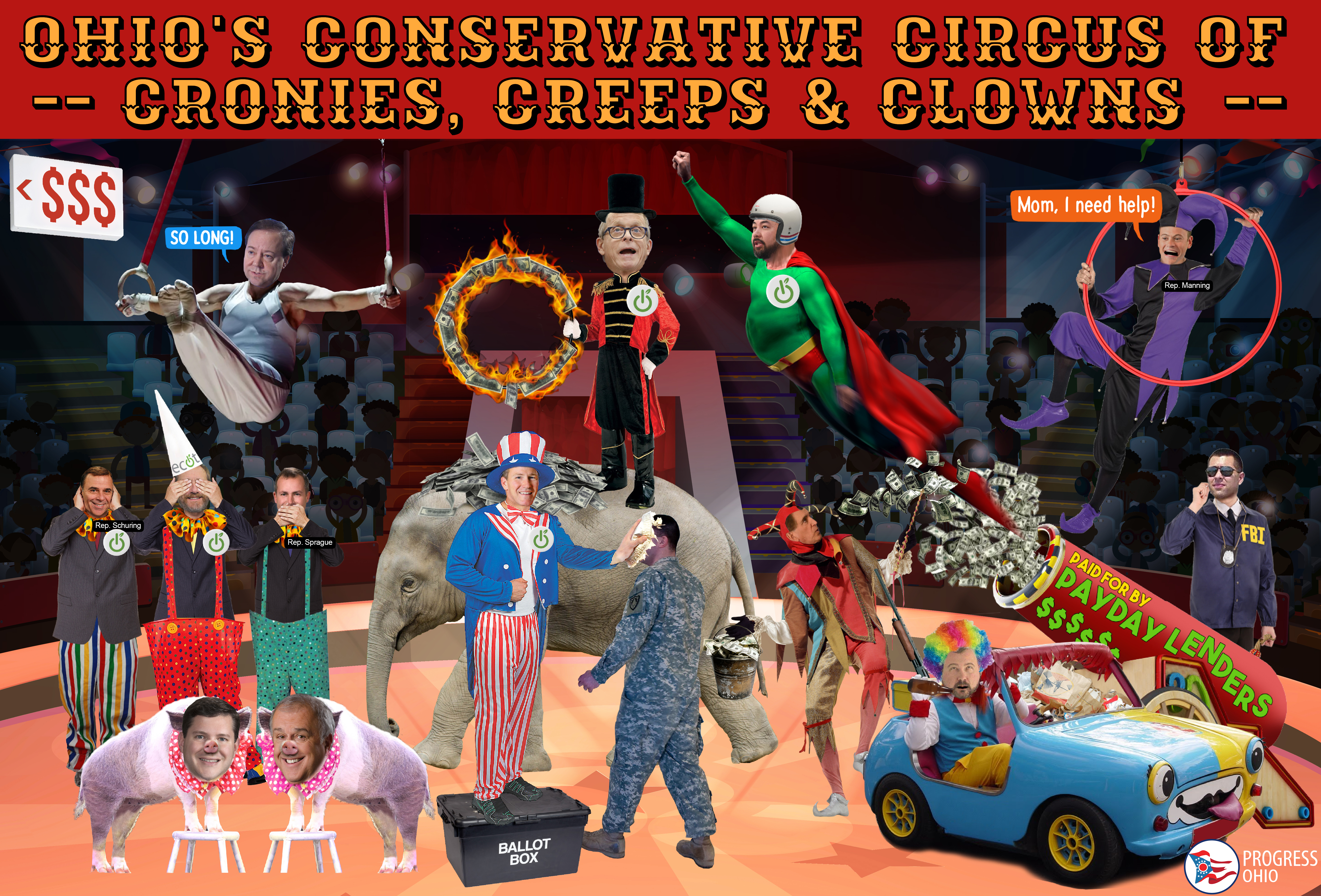 Check out the poster that inspired the above image

No it’s not 2018 — it’s 2006, and Republicans are about to get swept in a historic blue wave. After Republican mega-donor Tom Noe goes to jail for bilking taxpayers out of millions of dollars in the Coingate scandal, Governor Bob Taft became the first Ohio governor to be convicted of a crime while in office, and Secretary of State Ken Blackwell made news for declaring he’d rather go to jail then let Ohioans vote, voters became angry. Democrats won every single statewide race except for auditor.

And as the 2018 election nears, Republicans are trying as hard as possible to party like it’s 2006.

Former House Speaker Cliff Rosenberger made history with his resignation after he admitted the FBI was investigating him, presumably for his trips around the world courtesy of pals in the payday lending industry – and with some of his friends in the state legislature like Nathan Manning. “Magically”, after Rosenberger resigned a payday lending reform bill sailed through committee — a clear attempt by Republicans to throw Rosenberger under the bus. It didn’t fool anyone.

Like 2006, corruption infects the Ohio GOP today, and everyone knows it’s not limited to merely one scapegoat. All the Republicans – including Rosenberger’s second-in-command Speaker Pro Tempore Kirk Schuring and his buddy Representative Robert Sprague – knew about these trips and his sweet deal from mega-donor Ginni Ragan, who set him up in a downtown condo. But as dutiful careerists, they closed their eyes, put their fingers in their ears, sang “la la la” really loud, and pretended not to notice, all while just hoping for that next big promotion.

And all Republicans benefited from the massive amounts of money ECOT founder Bill Lager funneled to them. Lager has been making it rain on Republicans the past two decades, spending over $2 million to buy off Ohio politicians – including the Ohio Republican Party, Mike DeWine, Jon Husted (who was so bought off he spearheaded legislation that weakened charter school oversight), and Dave Yost (who was SUPPOSED to be overseeing the school).

Republican “Hear no evil (that Rs do), see no evil (that Rs do), speak no evil (that Rs do) comes full circle with Representative Jim Renacci. Renacci became the GOP’s last hope against Senator Sherrod Brown, and in return they remain determined to ignore the fact that they guy who boasts of still doing his mother’s taxes can’t manage simple campaign finances. He somehow forgot to disclose $50,000 worth of political contributions (for what it’s worth, that means Renacci forgot about the equivalent of an average Ohioan’s household income) while registered as a lobbyist. After the AP reported on it, his campaign’s actual response: he didn’t need to do file a form ending his role as a lobbyist, but he did it anyway…two years late. And they’ll file another form just in case.

Uh-huh. And that doesn’t even include the sneaky campaign finance scheme Renacci set up to transfer money from his gubernatorial campaign to his personal one – a scheme that’s almost certainly illegal but conveniently difficult to prove.

With candidates like Renacci, no wonder the GOP keeps sticking their heads in the sand.

But just as in 2006, Republican plundering of taxpayer money isn’t limited to complex schemes cooked up by lobbyists looking to get rich quick — sometimes it’s just old-fashioned politicking, like riling up your base or suppressing votes.

Facing a challenge from the right in his quest to become Ohio’s next governor, DeWine has decided the best way to get good press is to sue even when he KNOWS the laws are unconstitutional and his lawsuits won’t go anywhere. Yet he still blows through millions of taxpayer dollars, because he knows his base will get fired up. His failures are astronomical: he signed onto the suit that eventually legalized gay marriage throughout the country – including Ohio – and he even had to pay Planned Parenthood after using the Attorney General’s office to harass them.

DeWine’s running mate Secretary of State Jon Husted also uses taxpayer dollars to waste government money – except instead of getting votes, he uses his office to suppress votes. Like Ken Blackwell before him, the Secretary of State’s office is just another way to control who votes and who doesn’t. Husted has fought all the way to the Supreme Court the right to remove people from voter rolls for not voting, a right that has caused veterans to be purged while deployed. The process also (for Republicans) conveniently burdens low-income communities and communities of color.

When confronted by veteran and Oak Harbor Mayor Joe Helle, Husted couldn’t even muster a response as to why he was spending his time and taxpayer resources funding voter purges.

Not even trying to hide lawbreaking anymore

Of course, amidst all of this is Republicans blatantly not caring what the public thinks of them and letting their true selves be revealed. This complete disregard for their constituents and common decency has led lawmakers to stop even being careful when they break the law or harass their own employees. Look at Representative Wes Retherford, who didn’t even have the shame to resign after drunkenly passing out in a McDonald’s drive-thru with a loaded handgun.

Or former Representative Wes Goodman, who pretended to preach “family values” (while opposing LGTBQ+ rights) but had no problem harassing and sexually assaulting male teenagers at evangelical donor events. Then there’s former Senator Cliff Hite, who targeted a state employee over a dozen times and straight up told her that he needs a “fuck buddy” while trying to convince her to have sex.

Besides all politicians involved in these instances being the worst kind of pigs, what sticks out is that they weren’t afraid of getting caught. Ohio GOP leadership is either so clueless that they’re “leaders” in name only, or they think it’s more important to keep their bros in public office than serve the public.

That complacency is what kicked them out of office in ‘06 and will kick them out again in ‘18.

The cowards are already fleeing. After protesters started showing up at his office every day, former Representative Pat Tiberi couldn’t even finish his term before he fled for greener ($$$) pastures.

Voters know that Republicans have allowed almost a decade of power to corrupt their party, and in November their unbridled control will end.

Want to show off that you’re part of the Resistance? Get your RESIST and PERSIST stickers today!