It’s not only Trump World being targeted by Special counsel Robert Mueller; he’s also apparently questioning and searching Russian oligarchs (rich people who pay off politicians) when they come to the U.S. CNN reports that at least two have been stopped, with one’s electronic devices being searched when his plane landed in New York. They’re not just stopping at our borders either; they’re asking for documents from oligarchs who haven’t travelled to the U.S. as well, and the questions aren’t stopping at various forms of collusion. Mueller’s team is reportedly “asking whether wealthy Russians illegally funneled cash donations directly or indirectly into Donald Trump’s presidential campaign and inauguration.”

Trump ‘Trade War’ Hurts GOP Chances For Senate Pickup
With the announcement of tariffs targeting Chinese exports that may or may not cause a trade war, President Trump has put his fanboy and free trade advocate Congressman Jim Renacci in a tight spot. On the one hand, Renacci loves touting his big-business past, and there’s nothing big businesses like more than moving operations out of America to find cheap labor overseas, then selling their products to Americans without annoying fair taxes getting in the way. On the other hand, Renacci wants to appeal to – or at least not piss off – all the disaffected workers Trump won over in 2016. For a man who had the audacity to demand Trump call him personally before Renacci would run for Senate, that’s quite a tightrope to walk and causes him to say wimpy things such as that he wants to “make sure that we don’t have any window between what the president wants to get done and what Ohio businesses and the economy really need.”

Senator Sherrod Brown, on the other hand, continues his decades-long advocacy for American workers by supporting enactment of fair trade policies. 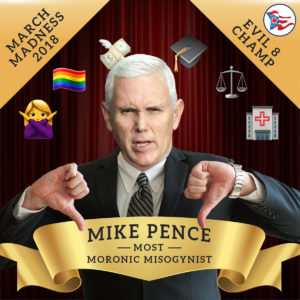 You voted, and now it’s official: Ohioans believe Vice President Mike Pence is the evilest of the eight people we put up in our March Madness bracket, “The Evil 8.” Pence beat out Renacci to win the “Moronic Misogynist” category, and went on to trounce Husted, DeVos, and DeWine in our 4-way championship, racking up 51{13d0ec820073bd9e1421f992be6d7f806218ceabf12a75b72960e64647ae4ac4} of the vote. Thanks to all who voted! Want to disagree? Let us know in the Facebook comments or on Twitter!

UTERI WATCH
Gerrymandering Leads To Onslaught Of Anti-Abortion Bills In Ohio
This great analysis from Slate explores a contradiction many politicos outside of Ohio don’t understand about our state: how can on a national level we be so purple – a bellwether for presidential elections – yet consistently make national news for regressive policies? Especially regarding anti-choice legislation, the rest of the country associates us with the heartbeat bill, a 20-week ban, a Down syndrome ban, and extreme restrictions for medical clinics that choose to provide abortions.

One of the explanations (besides an Attorney General willing to spend unlimited amounts of taxpayer money defending blatantly unconstitutional laws) is gerrymandering. By manipulating the map to disproportionately favor GOP candidates, Republicans have forfeited a lot of the state legislator to extremists. As NARAL Pro-Choice Ohio Executive Director Kellie Copeland  points out, “The gerrymandering has been so bad in Ohio that I think it’s actually disenfranchised voters, because the politicians have picked their constituents instead of the other way around.”

This extreme manipulation of Ohio’s voters is why ProgressOhio is firmly supporting Issue 1, and you should too.

Docs, Patients & Advocates Oppose Unnecessary Work Requirements
Opposition continues to grow against the unnecessary bureaucratic hurdles Ohio conservatives are attempting to place in front of those who rely on Medicaid. Despite over 500 comments opposing the 1115 waiver (which, if granted, would allow Ohio to institute work requirements for those on Medicaid) being delivered to the Ohio Department of Medicaid, it looks like the state will still apply. The problems are numerous, including increased administrative costs for county governments, increased difficulty to access health care, and people falling through the cracks.

Sinclair Turns Reporters Into Parrots; Cincy Councilman Boycotts
You’d be forgiven for thinking this video showing anchors from Sinclair-owned stations around the country parroting corporate talking points is from the Onion, but sadly it’s very, very real. While CNN had already broken the news anchors would be forced to read a script, Deadspin’s video mash showed exactly how dystopian the corporate giant’s script is, and has caused a huge backlash across the country. The controversy has rocked Ohio, where Sinclair owns stations across Ohio and Cincinnati Councilman P.G. Sittenfeld has declared he’s boycotting the Cincinnati station. We can only hope more will follow.

CLE Touts Ties To MLK; Marches Span Across Nation On 50th Anniversary of Assassination
Wednesday, April 4, was the 50th anniversary of one of the saddest days in American history: the day Reverend Martin Luther King, Jr. was assassinated after supporting a sanitation workers’ strike in Memphis. As one of the most prominent civil rights activist in history, King travelled the country fighting to make our society more just. In Cleveland, which he travelled to many times, King helped “organize tenants, boycott discriminatory employers, curb police abuse and register voters.” This Cleveland.com feature includes people who interacted with King, some of whom have helped carry on his legacy.

Dem Lawmakers Move To Restore Overtime Earnings For Ohio Workers
State Representatives Brigid Kelly and Kent Smith discussed their plan to introduce legislation to ensure that low wage workers putting in over 40 hours are eligible for Overtime protections. President Obama had worked with the DOL to promote a rule change benefitting workers making less than $46,000. But this rule change was “effectively blocked,”  according to ProgressOhio’s Monica Moran. Reps. Brigid Kelly and  Smith joined Moran and Policy Matters Ohio (PMO) researcher Hannah Halbert. Moran  shared that 12.1 million workers, including 351,000 Ohioans, were losing out on overtime pay, and that the press conference was held specifically due to the fact that the value of wages lost had just exceeded $500 million nationally on April 1st. Halbert said that Ohio workers have lost more than $18 million in that time, and each additional week without action adds $866,234 to that.

What’s In The Water? ‘Zombie Raccoons’ Plague NE Ohio
In what looks like a glimpse in to the zombie apocalypse, raccoons in NE Ohio are reported to be exhibiting ‘zombie-like’ attributes, such as staggering on hind legs and baring their teeth while prowling during the day. Authorities are spectating as to the cause, and whether or not they are related to the environment. You can read more here.

2018 ELECTIONS
‘Debate Ducking DeWine’ Won’t Talk Medicaid, Spends $1 Million On New Ad
While he still won’t talk about his stance on Medicaid expansion, which has directly benefited nearly 700,000 Ohioans and helped thousands struggling with addiction, Team DeWine is glad to tell the story of how he met his wife Fran in the first grade and raised a family with eight children via his latest $1 million ad buy.

Some Ohioans aren’t happy with DeWine’s evasiveness; earlier this week in Lima,  a group stood in the rain outside of Mercy Health-St. Rita’s Medical Center to demand that DeWine make his stance known on whether he will keep Ohio’s Medicaid expansion on the books. But DeWine’s record is both extensive and, as the Columbus Dispatch put it, “ both a point of pride and a target.” Like when he advised against municipalities raising the minimum wage, attacked Planned Parenthood, and wasted thousands (probably approaching millions) of taxpayer dollars fighting losing lawsuits.

Cordray Touts Small Biz Plan in Youngstown
Gubernatorial candidate Rich Cordray visited the Valley this week to roll out his ideas for small business development. Cordray said that, “Instead of always just offering bonuses and packages to out of state companies, big companies that land in the big cities, we need to find ways to build our small businesses and help them expand and grow,” according to wfmj.com.

Cordray also wants to launch a program called “Startup in a Day”, to allow entrepreneurs to obtain all the permits they need in one day.

Early Voting Starts Next Week. Who Should You Vote For?
You’re registered to vote, right? The deadline is April 9th.

Tom Suddes wrote this piece which includes a report called “Twelve Questions for Ohio’s Next Governor,” and an accompanying report, “Toward a New Ohio.” These questions include simple, bottom-line questions that many average working Ohioans have. Take a read, and see where the candidates line up.