Who’s the most evil: these Ohio politicians, or some of our national electeds? After voting for the Evil Eight, we’re down to the Foul Four – the politicians who won their respective categories of the most pressing issues facing Ohioans: politicians who stay in so long they put their career ahead of their constituents (Swamp Stars); blatant sexists in public office (Moronic Misogynists); politicians who try to choose their constituents by limiting who can vote (Ballot Bandits); and leaches who use our public education coffers as their personal piggy banks (Education Enemies)

This is a four-way contest, a true Worst-of-the-Worst. Tell us who you think is the most dangerous to Ohio, and we’ll announce the winner on Monday. Make sure to read below why each made it into our Foul Four.

Vote on TWITTER! We’ll announce the “winner” on Monday. If you want to be the first to learn who wins each round, sign up here. And read about each of our Evil Eight below. 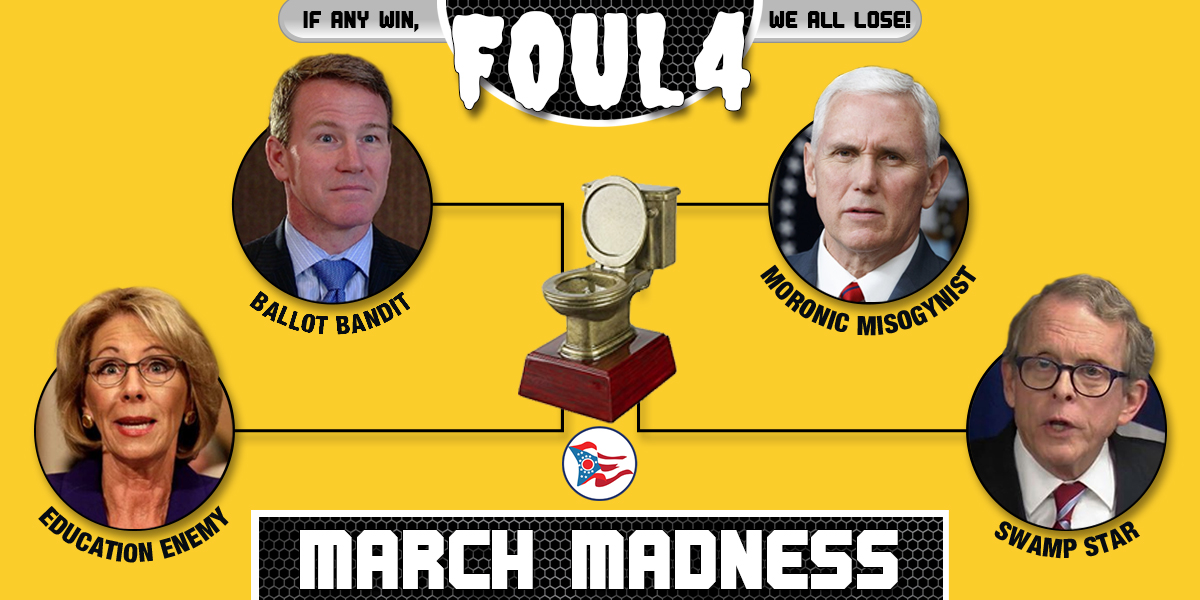 Swamp Star: Mike DeWine
Ohio Attorney General Mike DeWine is a career politician on steroids: there’s not an office he won’t run for or issue he won’t flip-flop if he thinks it’ll help him get elected. He’s changed his mind so many times that he’s dissed bills he actually voted for, and now he’s been endorsed by the Buckeye Firearms Association; he famously rescinded his endorsement of Mitt Romney to endorse Rick Santorum in the GOP presidential primary; and his gubernatorial campaign attempted to completely ignore questions from the Columbus Dispatch in their questionnaire. An elected official for over four decades, he’s served in basically every possible office except maybe dog catcher.

Moronic Misogynist: Mike Pence
Mike Pence’s fears of women are so well-known his rules for interacting with them are known as the “Pence Rules”. He will not dine alone with woman who’s not his wife, and he will not attend events where alcohol is served without her there. Besides the obvious – that the Vice President of the United States of America doesn’t feel like he has enough impulse control to not do anything unethical – this directly puts women at a disadvantage when it comes to their careers. One-on-one lunches and dinners are a part of politics (and many businesses, for that matter), and blanketly preventing women from the same level of access screams sexism. That’s even more apparent in a story from the Indianapolis Star (cited in the Washington Post because the link is now suspiciously dead), when Pence said that “any aide who had to work late to assist him be male.” Besides actively building a wall between himself and women’s careers, Pence is also stringently anti-choice and anti-LGBTQ+ rights, leading the fight to defund Planned Parenthood and calling gay couples a sign of “societal collapse.”

Ballot Bandit: Jon Husted
Ohio Secretary of State Jon Husted has made voting as difficult as possible in Ohio. Besides insulting veterans purged from voter rolls due to policies Husted defended before the U.S. Supreme Court, he has purged 2 million voters from the rolls merely for electing not to vote. He has also slashed the early voting period in Ohio and eliminated same-day voter registration — so when unsuspecting purged voters go to the ballots, they can’t register and vote on the same day. Unsurprisingly, these new rules target and disproportionately affect racial minorities.

Education Enemy: Betsy DeVos
Secretary of Education Betsy DeVos is doing about as well as her critics expected after she became the first Cabinet Secretary in the history of the United States to need the Vice-President’s tie-breaking vote in order to be confirmed.  Known for arguing that teachers need guns in schools so they can defend against grizzly bears, she’s continued to display the same level of first-grade knowledge and indifference about other subjects. She’s admitted to not knowing whether public schools have gotten better in her home state of Michigan after she fought for and the state implemented school-choice policies (they’re not doing well); she doesn’t know whether the rate of sexual assaults is higher or lower than the rate of false accusations (it’s much higher); and she’s considering rolling back a rule that tries to prevent racial minorities from being punished at a disproportionately higher rate than white students. All-in-all, she’s failing in a way that only a billionaire donor with no qualifications could.