Who’s the most evil: these Ohio politicians, or some of our national electeds? ProgressOhio wants to hear from YOU! We’ve chosen some of the most pressing issues facing Ohioans and Americans: politicians who stay in so long they put their career ahead of their constituents (Swamp Stars); blatant sexists in public office (Moronic Misogynists); politicians who try to choose their constituents by limiting who can vote (Ballot Bandits); and leaches who use our public education coffers as their personal piggy banks (Education Enemies).

Vote in these FACEBOOK COMMENTS or on TWITTER! We’ll announce the “winners” next week. If you want to be the first to learn who wins each round, sign up here. And read about each of our Evil Eight below. 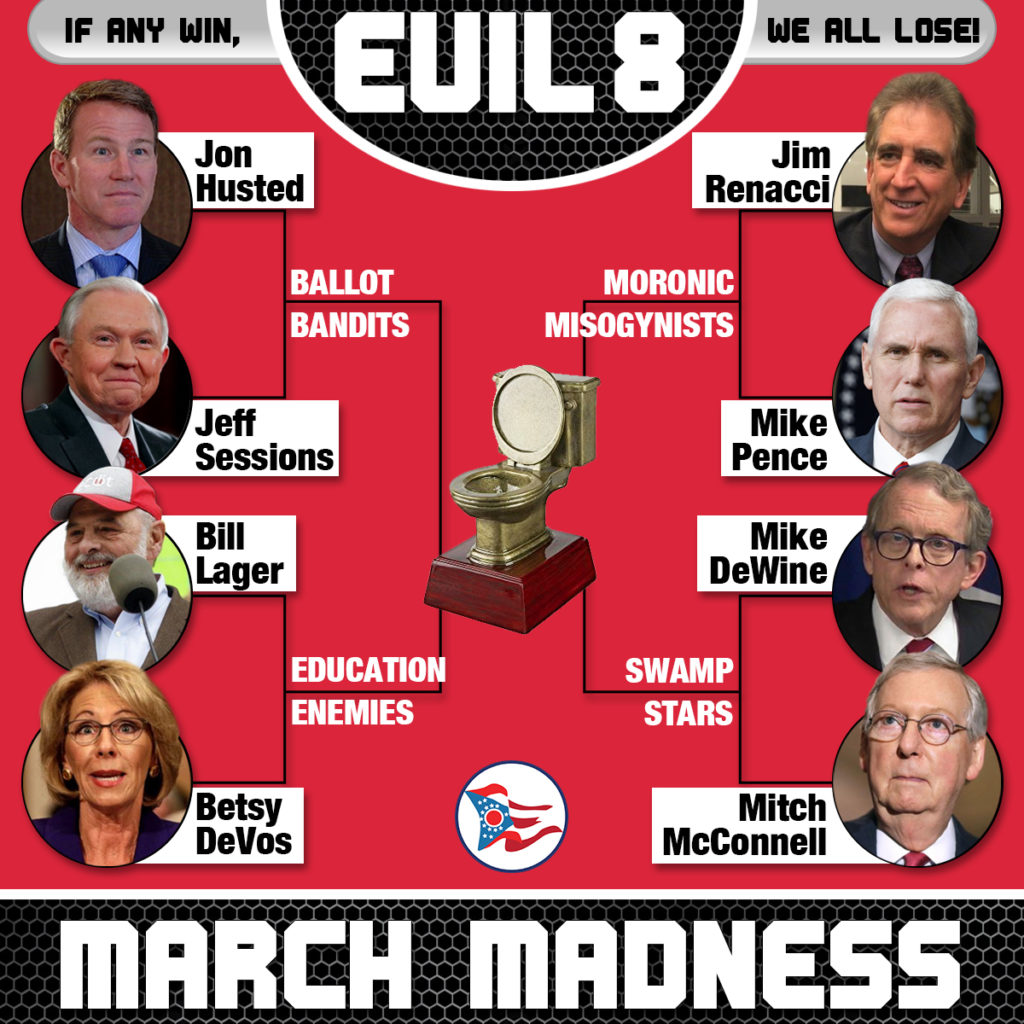 Mike DeWine
Ohio Attorney General Mike DeWine is a career politician on steroids: there’s not an office he won’t run for or issue he won’t flip-flop if he thinks it’ll help him get elected. He’s changed his mind so many times that he’s dissed bills he actually voted for, and now he’s been endorsed by the Buckeye Firearms Association; he famously rescinded his endorsement of Mitt Romney to endorse Rick Santorum in the GOP presidential primary; and his gubernatorial campaign attempted to completely ignore questions from the Columbus Dispatch in their questionnaire. An elected official for over four decades, he’s served in basically every possible office except maybe dog catcher.

Mitch McConnell
A modern version of Machiavelli’s The Prince, most of America learned about Senate Majority Leader Mitch McConnell when he declared that the most important priority was to make Obama a one-term president. Not create jobs, not make health care cheaper and affordable, it was to obstruct Obama’s agenda as much as possible no matter the consequences. This obstruction reached an all-time high when McConnell led an unprecedented block on Obama’s Supreme Court nominee, essentially stealing a seat for Republicans, and he’s been credited with blocking bipartisan deals on immigration and criminal justice reform. Trump is largely in the White House because McConnell decided he’d rather have a sexual predator as president than a qualified Democrat, but his opportunism seems to have hit a snag. Even with a unified Republican government, all McConnell has been able to do is pass one tax bill while somehow losing a Senate seat in Alabama, and it doesn’t seem like he’ll be able to get anything else done any time soon.

Jim Renacci
U.S. Representative Jim Renacci is a special kind of misogynist, the type who pays tons of money to keep women away from him. Either that, or he believes women don’t belong on a golf course. In addition to writing an anti-choice op-ed where he doesn’t even bother to mention women, the multimillionaire is a member of the Sharon Golf Club, an all-male golf course stuck in the Mad Men era that proudly advertises itself as having “strictly male appeal.” This membership explains why Mike Pence is so eager to campaign with Renacci in Ohio — it’s one of the few places the Vice President can grab a drink (more on that below). Trump – who Renacci supported from the very beginning of the primary – probably won’t make it though; no pussies to grab.

Mike Pence
Mike Pence’s fears of women are so well-known his rules for interacting with them are known as the “Pence Rules”. He will not dine alone with woman who’s not his wife, and he will not attend events where alcohol is served without her there. Besides the obvious – that the Vice President of the United States of America doesn’t feel like he has enough impulse control to not do anything unethical – this directly puts women at a disadvantage when it comes to their careers. One-on-one lunches and dinners are a part of politics (and many businesses, for that matter), and blanketly preventing women from the same level of access screams sexism. That’s even more apparent in a story from the Indianapolis Star (cited in the Washington Post because the link is now suspiciously dead), when Pence said that “any aide who had to work late to assist him be male.” Besides actively building a wall between himself and women’s careers, Pence is also stringently anti-choice and anti-LGBTQ+ rights, leading the fight to defund Planned Parenthood and calling gay couples a sign of “societal collapse.”

Jeff Sessions
If you can say one thing about Attorney General Sessions, it’s that he’s never stopped a little thing like the “right to vote” get in his way. Back in the 80s, then-US Attorney Sessions brought such phony charges against black civil rights activists that the case caused the Senate blocked his appointment to become a federal judge. Unfortunately today’s Senate didn’t care about the racist voter intimidation and confirmed him to become Attorney General, where he has already: supported voter purges; failed to pursue voter rights cases; and backed the gutting of the Voter Rights Act. While Sessions will be remembered on the wrong side of history for many issues, his consistent work to deny the right to vote to minorities is one of the most damaging.

Jon Husted
Ohio Secretary of State Jon Husted has made voting as difficult as possible in Ohio. Besides insulting veterans purged from voter rolls due to policies Husted defended before the U.S. Supreme Court, he has purged 2 million voters from the rolls merely for electing not to vote. He has also slashed the early voting period in Ohio and eliminated same-day voter registration — so when unsuspecting purged voters go to the ballots, they can’t register and vote on the same day. Unsurprisingly, these new rules target and disproportionately affect racial minorities.

Bill Lager
There’s no other way to say it: the founder of the Electronic Classroom of Tomorrow (ECOT) is just plain evil. With the goal of making as much money as possible, in 2000 he persuaded the State to pay big bucks to ECOT, and in just two years he went from broke to buying a $300,000 condo. Lager got so rich by inflating enrollment numbers absurdly, taking over $1 billion from the taxpayers over the course of 17 years, and essentially trying to shove problems under the rug by contributing massive amounts of money to lawmakers.

Betsy DeVos
Secretary of Education Betsy DeVos is doing about as well as her critics expected after she became the first Cabinet Secretary in the history of the United States to need the Vice-President’s tie-breaking vote in order to be confirmed.  Known for arguing that teachers need guns in schools so they can defend against grizzly bears, she’s continued to display the same level of first-grade knowledge and indifference about other subjects. She’s admitted to not knowing whether public schools have gotten better in her home state of Michigan after she fought for and the state implemented school-choice policies (they’re not doing well); she doesn’t know whether the rate of sexual assaults is higher or lower than the rate of false accusations (it’s much higher); and she’s considering rolling back a rule that tries to prevent racial minorities from being punished at a disproportionately higher rate than white students. All-in-all, she’s failing in a way that only a billionaire donor with no qualifications could.

Enroll in Healthcare The Foul Four