GOP Poised to Allow Trophy Hunting of Elephants
Yet another broken promise: after the Trump administration swore it would ban importing big-game animals, the U.S. Fish and Wildlife Service has opened the door to do exactly that. Last week, the department issued a memo saying it would issue permits to import elephant trophies from African nations on a “case-by-case” basis. This is despite the fact that Trump shocked environmentalists everywhere by declaring trophy hunting a “horror show,” though no one should be surprised that Trump was either lying then or he doesn’t care if his government allows such horrors to continue.

Kasich’s Legacy: From Ohio’s Governor to Philosophy Professor
For his final State of the State address, Governor Kasich opted out of, well, telling us the state of Ohio (hint: it’s not good), and instead lectured Ohioans on philosophers ranging from Kierkegaard to Nietzsche to Rousseau. When Kasich finally delved into policy, he conveniently failed to mention common-sense gun reform, the fact that Ohio ranks 49th in the country for opioid deaths, or that Ohio has the fifth-worst unemployment rate in the country.

You can read the speech here.

GOP Fueling Food Fight
As Congress prepares to write a new farm bill later this month, the GOP is already preparing to fling rotten tomatoes at the Supplemental Nutrition Assistance Program (SNAP, commonly known as food stamps).  Rep. Jim Jordan, co-founder of the radical House Freedom Caucus wants to use this opportunity to make it more difficult for Americans to get enough to eat by imposing an extra layer of government bureaucracy on the program: arbitrary work requirements.

Though it’s unclear what will be included in the first draft, any new eligibility requirements will face some tough hurdles; historically, the farm bill has been used as a compromise between legislators who want to support American farmers and those who want to protect SNAP.

Ohio: From Rust Belt to Opportunity Corridor
Is Ohio destined to be the next tech hub? Even Silicon Valley seems to think so. Last month, the New York Times joined Representative Tim Ryan and a dozen venture capitalists on a three-day bus tour through the Midwest that includes stops in Youngstown and Akron. They met with local officials and start-up businesses, and left understanding the Midwest we all know and love.

“This is nicer than San Francisco,” one investor said.

Third Member of Youngstown Schools Commission Resigns
Yet another Youngstown City Schools Academic Distress Commission member has resigned, making Barbara Brothers the third to do so in less than a week. From the Vindicator:

“House Bill 70, commonly referred to as the Youngstown Plan, which was signed into law by Gov. John Kasich in July 2015, enabled the now two-member state-appointed academic distress commission to hire a CEO to lead the district. The bill gives CEO Krish Mohip complete operational, managerial and instructional control.”

Legislature Pushes Back On Anthem to Pay ER Bills
Ohio legislators are standing up to Anthem Blue Cross Blue Shield as the insurance company seeks to charge customers who guess wrong if their injuries or illnesses are emergencies. House Bill 536 would prevent the insurer from enacting a new rule that would allow it to review all ER claims and deny those the bureaucrats (not the doctors) determine weren’t real emergencies. As Rep. Alicia Reece, who introduced the bill, points out, “It’s unreasonable for someone with chest pains to have to self-diagnose to determine whether it necessitates an emergency.”

2018 ELECTION
Former Justice O’Neill Opposes Woman’s Right to Choose
In a move that left most democrats scratching their heads, former Ohio Supreme Court Justice Bill O’Neill announced  his pro-life position. O’Neill explained that, as a state Supreme Court justice, he was bound by the U.S. Supreme Court’s 1973 Roe v. Wade ruling guaranteeing the constitutional right to an abortion. He then added  “I think it’s wrongly decided, there’s no question,” according to The Columbus Dispatch.

O’Neill later doubled-down on his stance by meeting with Ohio Right to Life’s controversial President, Mike Gonidakis, the following day. 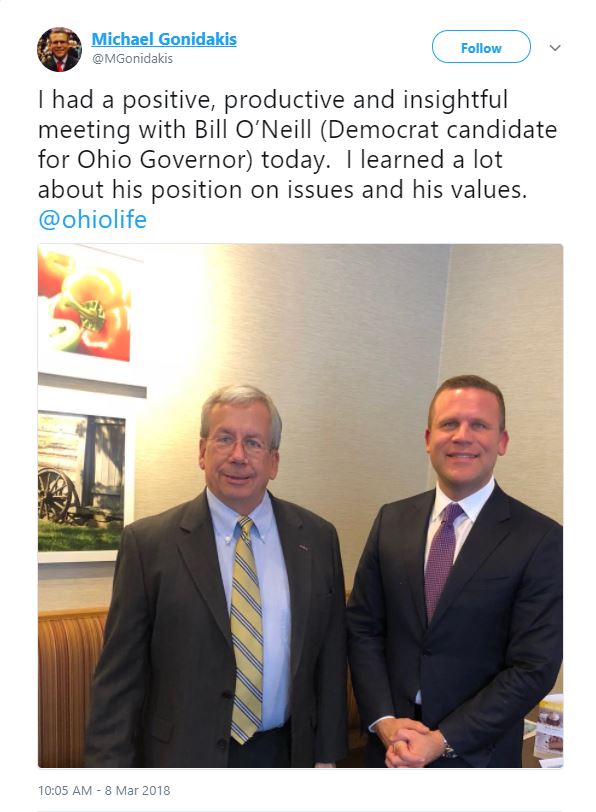 Considering that the National Institute for Reproductive Health shared recent data indicating that 85{13d0ec820073bd9e1421f992be6d7f806218ceabf12a75b72960e64647ae4ac4} of democratic women are pro-choice, the highest in decades, this is a just plain foolish position to take.

On March 8, people around the world celebrated International Women’s Day. Just a day later, Vice President Mike Pence came to *not campaign for* Congressman Jim Renacci, who is running for U.S. Senate. Renacci has never really been a fan of women’s rights; in fact he previously held a fundraiser at the Sharon Golf Club, which boasted a strict ‘no ladies allowed’  rule.

VP Pence has his own strange views on women; he once railed against  Disney’s Mulan as ‘liberal propaganda’ for depicting a young woman joining the military out of courage. Fitting duo to celebrate IWD together.