There were the signs outside Sen. Rob Portman’s on #ResistTuesday: “PORTMAN TRUMP’S TOOL”; “The Future is FEMALE” and “Be Brave – HOLD LIVE TOWN HALLS NOW.’’

There were chants: “Our bodies, our rights. Ohio Women Stand and Fight;’’ “Not the church, not the state. Women must decide their fate.’’

There were boos when speakers noted that Portman, home on recess, is refusing to meet face-to-face with constituents. 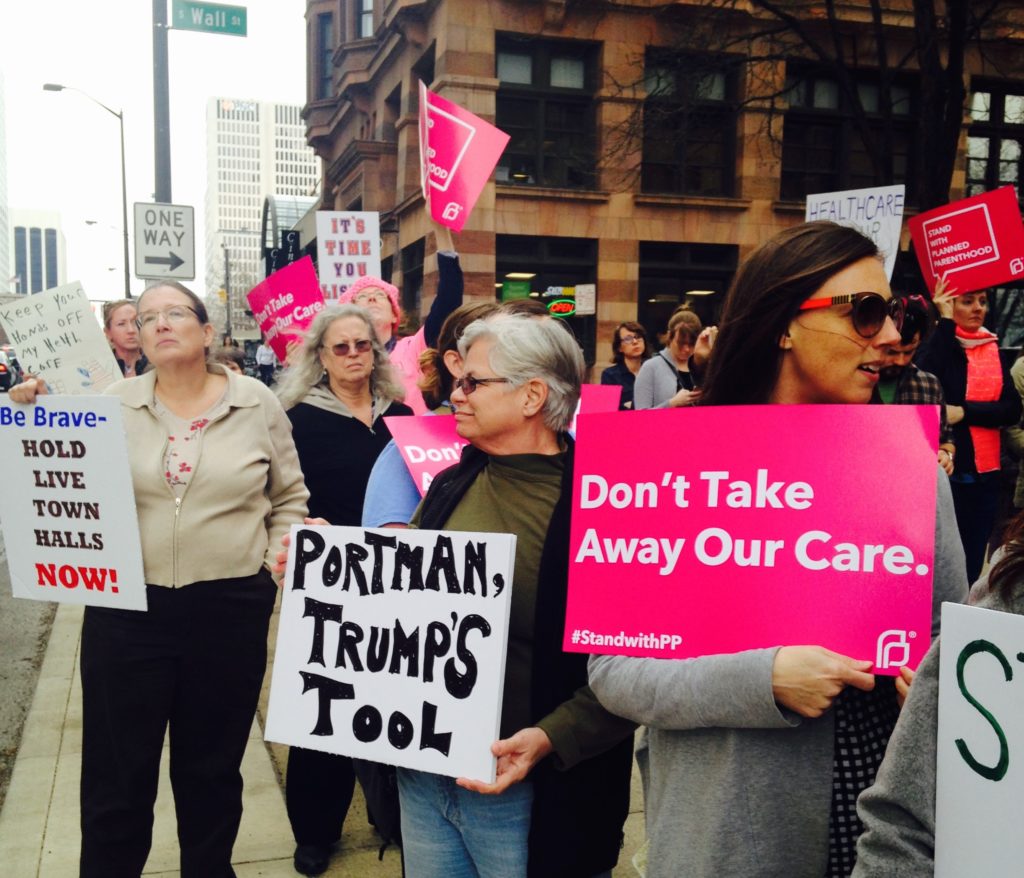 More than 300 Portman constituents, led by Planned Parenthood and Indivisible Columbus District 3, held a raucous rally outside Portman’s Columbus office demanding that he meet with those who just re-elected him. It is one in a series of protests aimed at congressional Republicans across Ohio who are shunning town halls and other face-to-face meetings while home this week.

For the past seven years, Republicans have vowed to repeal the ACA, commonly known as Obamacare. With the GOP in firm control of Washington, voters have deluged ACA opponents with demands for meetings, hoping to get input into the long-promised repeal-and-replace plan. Most are refusing. But Rep. Joyce Beatty, a Columbus Democrat who supports the ACA, will speak tonight at town hall in Columbus.

Hoping to get the attention of Republicans in hiding, ProgressOhio joined with health care advocates today and sent them videos of constituents who explain why they support the Affordable Care Act.

The video includes Mitch Lerner of Granville, the father of three children with juvenile diabetes who now have health insurance, courtesy of the ACA.

Lerner uses the video to speak directly to Congress: “These are small children whose lives could be devastated by the decision you’re about to make….  To steal someone’s health care who faces these dreadful health problems is so unbelievably devastating that I don’t know how you could ever look yourself in the eye again.’’

Substitute teacher Laura Dachenbach of Gahanna credits the insurance she obtained under the ACA with allowing her to hear.

“There would have been a number of jobs that would not have been available to me had I not been able to correct my hearing surgically,’’ she says in the video. “Health care is literally freedom.’’

“Emails and letters can’t fully capture the impact the ACA has had on Ohio families,’’ Wagner said. “The people most responsible for crafting a replacement must hear from the people most affected by its repeal.’’