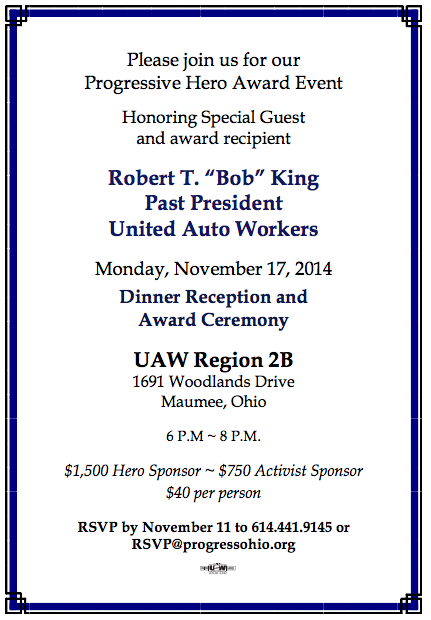 Event by ProgressOhio Education, a 501(c)(3) organization. Contributions are tax deductible to the fullest extent permitted by law.

Robert T. “Bob” King is a lawyer, activist and labor union leader. He served as President of the United Auto Workers (UAW) from June 15, 2010 until 2014. ProgressOhio is honoring him for all his work but especially his role in saving the American auto industry thus benefiting all Ohioans.

Bob King first made his mark as a leader in 1981, when he was elected vice president of UAW Local 600, one of the largest local unions in the world. He was described as one of the “bright young hopes for the future” and soon he moved up the ranks, bargaining the company-wide master contract at Ford Motors.

During the economic crisis, King led historic negotiations that helped save Ford from bankruptcy, while still protecting workers. He became UAW president in 2010. With corporate profits once again soaring, he has fought to make sure workers get their fair share. During his farewell speech this summer, he re-affirmed his belief in building a global movement for social and economic justice.

King is a member of the NAACP, the Democratic Party, and the Coalition of Labor Union Women. He has also served as a national vice president of the Muscular Dystrophy Association.

King is also a committed human rights activist. He led a group of union officials to El Salvador in 1989 to monitor elections there, and he has participated in protests at the School of the Americas, a United States Department of Defense facility at Fort Benning near Columbus, Georgia, which many accuse of training Latin American soldiers and officers in techniques later used to commit human rights violations.